What is Flutter and How to Get Training to Become a Flutter Developer? 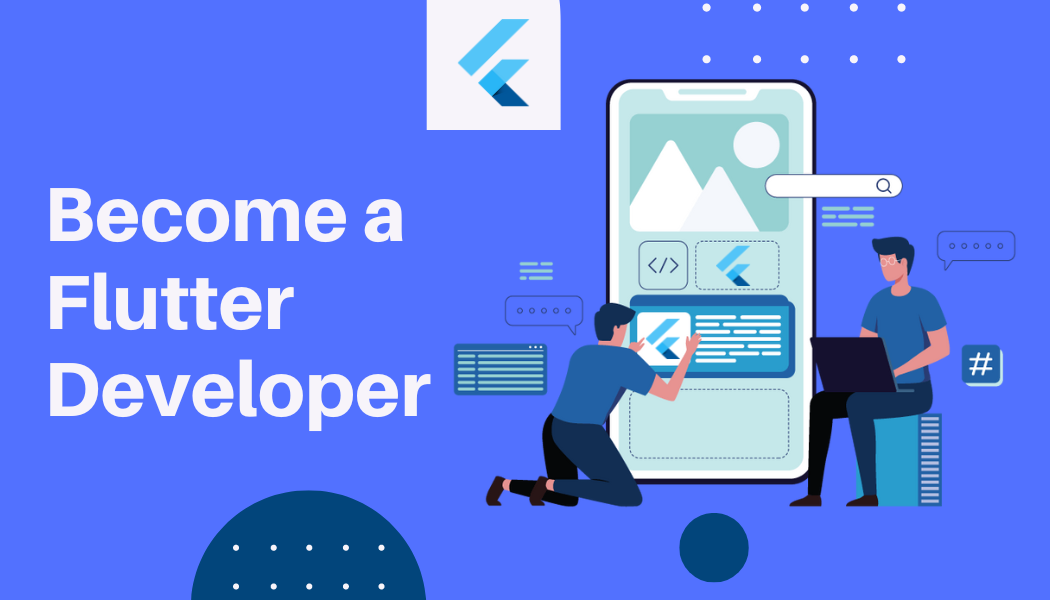 Consider that you have an Android app that is becoming more popular every day. There is growing pressure to release the iOS version. A lightweight web version of the software is also being requested by some users. Timing is crucial, yet you lack the funds, the time, or the resources to engage a developer, let alone prepare a launch that is ready for production.

Cross-platform software development comes into the picture in this situation. With the help of cross-platform app development, you can create an app for many platforms using the same codebase.

With no modification, the code used to publish the Android app may also be used to publish software for iOS, the web, or desktops. As a result, there is no longer any requirement to maintain a distinct codebase. Isn’t that great?

Several cross-platform app development tools and frameworks, including Flutter, PhoneGap, React Native, Ionic, etc. exist on the market. Each has advantages and disadvantages of its own. In this article, we will learn about Flutter.

Flutter, released in May 2017 is a UI tool kit made by Google for creating cross-platform apps. It is a mobile app development platform that enables developers to create high-quality user interfaces for both Android and iOS platforms. Flutter is also unique in that it enables developers to code in a reactive style, which makes creating user interfaces simpler and more concise.

Flutter is developing well in terms of popularity. After release preview 1 was revealed in June 2018, Flutter was already in the top 100 java codes based on GitHub stars, but it has since gained a following and is currently in the top 30. In the top 10 java codes on Github two years later, Flutter SDK is listed after importance like Linux, vue, and vs code. Without a doubt, this is a positive trend.

Here is a list of some of the features and qualities of Flutter without drawing any comparisons to other platforms, in case you want to give it a try:

Fast and easy development- One of Flutter’s most praised features is fast reloading, which enables you to view changes made to the code right away on mimics, simulators, and hardware. The program doesn’t have to be restarted because the updated code is loaded again in less than a second. This is great not only for creating user interfaces or adding features but also for addressing bugs. Despite the simplicity, Flutter asserts in its documentation that creating apps with it doesn’t require any programming experience at all: “Experience with object-oriented languages is undoubtedly useful, but even non-programmers have created Flutter apps!” There is only one method to determine if this is accurate.

Roadmap to becoming a flutter developer

Flutter is a new mobile development framework developed by Google. It aims to make mobile app development faster and easier. It has created many resources to help developers get started, including online courses and guides. By any chance, if you chose to start learning this, do not miss out on our Flutter internship program. We are tenacious techies and have a few opening internship positions on first come first serve.

Tenacious Techies is an IT company creating ground-breaking products and thoughts, and they have some very amazing internet projects in the works.

We are passionate about concepts, imagination, and creative thinking, and we incorporate this into how we work with clients. Book your slot at the earliest by dropping us an email or contacting us directly.

Step-1: Begin with the basics

Dart is a complex language that will take some effort to learn. One should at the very least understand the basics of the Dart language before diving into projects.

If you are already familiar with Java, switching to Dart will be fairly simple. Avoid slipping to Flutter without first understanding Dart. A few concepts that are necessary to learn are-

After completing step 1, let’s move to the further steps to explore more.

Every time we begin learning a new language, we require the desire to practise regularly. It feels comforting when we first start with UI development. When your app’s screen first appears on your device and everything works as expected, you’ll feel motivated. Moreover, when working with UI Development in Flutter, a developer will encounter numerous problems and faults. So it’s advisable to understand how to do UI development and follow the below-mentioned points for the same.

After you have got comfortable with UI development, you should begin studying API calls. You will always require APIs while developing any apps. Use one of the many available packages, such as HTTP, dio, retrofit, chopper, etc., to make API requests.

The fundamental one is HTTP, while other packages are wrappers over HTTP with a few additional features. You can pick any of them, but starting with HTTP and moving on to other packages is always a good idea. Once an API is merged and an API call is prepared, you need to parse that API Response into a model class.

Every software needs databases to function. The requirement to save certain app data will always remain. Some databases that can be used with Flutter include:

One of the most key factors of Flutter is state management. It gets extremely challenging to control the status of your screens and application as our app grows in size and complexity.

There are various State Management methods and tools on the market. But don’t overload yourself. Use the one with which you are most at ease. Given that Provider is one of the fundamental State Management Packages, you can start there.

It’s important to keep the project structure maintained. It benefits newcomers to quickly review the code. Additionally, it makes it easier to identify bugs and to add or delete functionality as needed without affecting the functionality that is already in place. MVVM, MVC, TDD, and other established architectures are only a few examples.

These are excellent and were produced after thorough research. But using them is not required. You can always design the architecture that works for both your team and you. Always keep these things in mind when maintaining your architecture:

If your architecture is satisfying the above-mentioned point, you are good to go.

How long does it take to learn Flutter?

It is a question that has been asked by students for centuries. How long does it take to learn? The answer, of course, depends on the person and what they are trying to learn. However, some general guidelines can be followed.

To learn something new, the first step is to understand what it is that you want to learn. This may seem like an obvious statement, but many people try to learn things without knowing what they are trying to do. Once you know what you want to learn, break it down into smaller parts.

Trying to learn everything about a topic at once can be overwhelming and may lead to frustration. Instead, focus on one aspect of the topic at a time and master it before moving on to the next part.

Another important factor in learning is practice.

When it comes to learning Flutter, you have two main choices: online or offline. Both have their advantages and disadvantages, so it can be tough to decide which is the best option for you. In this article, we’ll take a look at the pros and cons of learning Flutter online vs offline, so you can make an informed decision about which route to take.

You might think that every cross-platform framework has some abilities and offers some features that are important to the job, and you would be right. But in a few important ways, Flutter varies from its competitors. Let’s look at what makes Flutter app development better than other frameworks in more detail.

This one is rather easy to understand. The Flutter development framework is more flexible than its competitors. When compared to developing the same app individually for Android and iOS, you can often expect that a Flutter project will require at least twice as few man-hours.

The fundamental reason is quite simple: you can provide the appropriate visuals in your application without creating any platform-specific code. Flutter includes the integration of any 2D-based UI without requiring interaction with a counterpart in a native application.

In addition, Flutter offers a declarative UI construction API, which in my experience significantly improves efficiency. When it comes to visual modifications, this is the most noticeable.

Identical to other native apps

Flutter doesn’t rely on any middle code representations or analyses, in contrast to the methodology used by the majority of cross-platform frameworks. Any performance issues caused by the interpretation process are avoided thanks to the direct integration of Flutter applications into machine code. Eventually, you can use Flutter to fully compile your release application.

The ability to customize anything you see on the screen, regardless of how complex it would be, is one of Flutter’s biggest advantages. While it is typically possible to create a very customised user interface on native systems as well, the work involved is much different.

Ability to go beyond Cellphone

You can do much more with Flutter than create mobile apps. Flutter for Web and Flutter Desktop Embeddings are now available as well. For instance, Google demonstrated a technical preview of Flutter Web at this year’s I/O conference, allowing users to execute pure Flutter applications in a browser without changing the source code.

This is how you can start your flutter journey with the internship program at Tenacious techies. We will help you,

Computer science has become an important part of our lives. It is used in almost every field, from banking to healthcare. To keep up with the latest trends and technologies, everyone needs to have a basic understanding of computer science.

This course will provide you with that basic understanding. The course is divided into four sections: basics, programming, web development, and mobile development. Each section includes a series of lectures and exercises that will teach you the necessary skills.

It remains to be seen if Flutter will succeed in attracting mobile developers. But suppose you’ve already made the decision to use Flutter as your SDK or decide to give it a try. In that case, we strongly advise you to do it correctly by automating the development, testing, and delivery of the app by putting in place a specific CI/CD tool for Flutter.

If you have read till this far, you might as well want to start the free trial